In recent years, the Spanish sports betting market has seen a proper revival. Brands such as Wanabet and GoldenPark have raised the standard drastically, causing other bookmakers to take notice. Founded in 2014, JokerBrand is one such site. They had a pretty shaky beginning but were eventually able to come to their senses and provide better service.

Even though they are highly regarded by Spanish punters, JokerBet is not quite on par with the region’s best. It’s an indubitably good site, but there is just no way they can compete with the mainstays. If you don’t mind some of the flaws, then you’re in for an enjoyable experience, all in all. 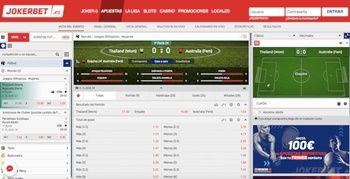 It seems that most Spanish sportsbooks have a hard time determining which visual direction they want exactly. JokerBet is just one more example of a UI containing a myriad of different ideas and influences. Don’t get us wrong, we enjoyed navigating the site during the testing period, but there was an apparent lack of cohesiveness between the elements.

Most of the site is black and white, which makes the absence of a dedicated dark mode even more perplexing than it would be in a vacuum. At times, the background is just too bright and distracting. We don’t quite get it - why are betting sites so reluctant to make their UIs easier on the eyes?

However, we do like some of the stuff they did with presenting markets. Every game has a bunch of little brackets underneath it, showing all the most popular markets. There are also visual representations for most football fixtures, including a mini-pitch with action indicators.

Something we absolutely hated was the loud sound that gets played whenever a goal is scored or a card is given to a player. We understand that this is a method to keep players engaged, but for the love of God, why does it have to be so loud by default? It’s the little details that prevent JokerBet from getting the highest marks in our review.

Their banking section is pretty lackluster, to be honest. JokerCash is a cool concept, but it’s just not enough to make up for the lack of eWallets such as PayPal or Skrill. Bank transfers and cards are always nice to see, but this isn’t 2005 and we shouldn’t laud JokerBet for being below average in this department.

Perhaps the best part of the site is the customer support team, which is comprised of skilled agents that are always willing to go the extra mile. Email and live chat are currently the only available options. Frankly, who needs a phone line anymore?

JokerBet's bookmaker website offers its users a wide range of sporting events to bet on. Among the covered sports are: Tennis, Basketball, Handball, Baseball, Football, Formula 1, Futsal, Volley, Ice Hockey, Cycling, Table tennis, Mixed martial arts, Golf, Cricket, Darts, Rugby, English billiards, NASCAR. Betting odds at JokerBet are competitive overall. Soccer betting margin is 5.2%, tennis betting margin is 7.5%, ice hockey betting margin is 7.6%, basketball with 5.6% and so on. The overall betting margin is 6.5%. These betting margins have been calculated using odds from different events in each sport. Please note that margins may be different from a sport to another, and even from a league to other.

It’s incredibly easy to place a bet at JoketBet, with an array of tools and features that help you follow the game as thoroughly as possible. Live streaming has become more frequent, but we would like to see more matches, not just the occasional La Liga clash. Odds are around the industry average, so value betting is a legitimate option.

As all bookmakers that target mainly Spanish punters, JoketBet is licensed by the country’s General Directorate for the Regulation of Gambling. Not only does this license provide players with protection in case of a dispute, but bookies also flaunt it as the foremost seal of approval one can get. As for safety measures, a stellar firewall-SSL encryption combo is in place, so safety is not an issue.

JokerBet offers a range of welcome bonuses to its new users. For example, International users (that are not from a country specifically listed below) will receive a bonus of [-].

Please browse below for a list of bonus options available to users in various countries and on the different localized JokerBet websites:

Besides welcome bonus packages, JokerBet also offers different promotions that can be accessed by registered players. Check here for latest promotions and bonuses on offer.

OnlineSportsBetting.Guide does not monitor promotions and bonuses at JokerBet at the moment. Visit the website for current offers.

You can find here a list of the most frequent questions regarding JokerBet, along with answers. While we are trying to keep the info up to date on this page, please note these details may change in time and is needed to double-check it with JokerBet website, where most info comes from.