Even though both regional and international bookmakers can provide the same product quality, there is somewhat of a stigma against betting sites that serve players from a single country. People are quick to believe that such sites are without sufficient funds to provide a product that would compete with the big dogs from abroad. eWinner.pl is one prominent example of why this can’t be further from the truth.

In fact, we believe that they are a testament to how amazing results can be if one focuses on just a small audience. The result is a supreme interface, with many more benefits scattered across different sections of the site. Continue reading our eWinner.pl review to find out what exactly is that makes them a staple of Polish sports betting. 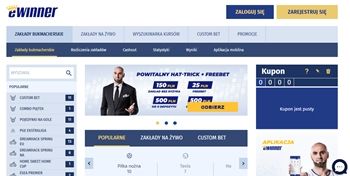 You know that feeling when you’re in middle school and you have to work long hours to complete a science project and it’s finally done? That’s how the front-end developers must have felt when eWinner.pl went live, as the site is a beauty in the truest sense. It’s so meticulously executed that it’s impossible to not feel at home from the getgo.

Even though we are not fans of using white as the primary background color, eWinner.pl forced us to eat our words and swallowed them up once we saw the way they use a comfortable layout by combining big blue boxes to create an artificial sense of separation. With only minuscule instances of the background being visible between sections, your eyes won’t be strained if you intend to spend hours doing research on odds in order to create the perfect betting slip.

This is by far one of the fastest sites we’ve ever seen, while also being beautifully scaled down in order to accommodate the specific characteristics of the iOS and Android platforms. It’s a shame that eWinner isn’t a big international name, as it’s not fair that only Polish players get to experience this level of visual supremacy.

Customer support is definitely a sight to behold, with a special inquiry about the nature of your problem, which makes response times nonexistent and resolutions happen quicker because you’re directed to the right department. Agents are cordial and even have an excellent command of English, so we would even go as far as recommending eWinner as the top option for ex-pats, too.

According to our Polish correspondents, eWinner aces the banking department and provides almost every popular and niche option available in the country. Waiting times are nonexistent, really.

We were amazed by the sheer number of different markets, with mid-table Bundesliga derbys getting 150+ markets. This is a scary sight for all of eWinner’s competitors and an amazing one for all pros and heavy hitters. The bet builder and quick bet post tools are very helpful when you’re in a rush to make a bet before the match starts. In-play betting is heavily represented too, rounding out a spectacular offer.

eWinner.pl received an official online sports betting permit from the Polish Ministry of Finance on October 30, 2018. Their license number is PS4.6831.29.2017, with the expiry period being six years. SSL encryption is used to safeguard customer data. Yet another win for this excellent bookmaker.

eWinner.pl offers a range of welcome bonuses to its new users. For example, International users (that are not from a country specifically listed below) will receive a bonus of [-].

Please browse below for a list of bonus options available to users in various countries and on the different localized eWinner.pl websites:

Besides welcome bonus packages, eWinner.pl also offers different promotions that can be accessed by registered players. Check here for latest promotions and bonuses on offer.

OnlineSportsBetting.Guide does not monitor promotions and bonuses at eWinner.pl at the moment. Visit the website for current offers.

You can find here a list of the most frequent questions regarding eWinner.pl, along with answers. While we are trying to keep the info up to date on this page, please note these details may change in time and is needed to double-check it with eWinner.pl website, where most info comes from.